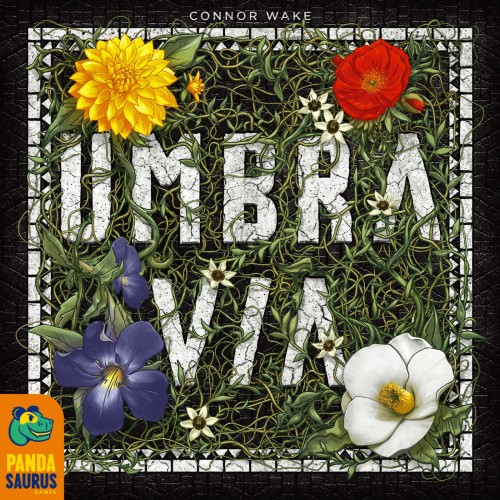 Umbra Via has been your wishlist!
add  Add to Wishlist

Just beyond the towering vines lies an ancient pathway into the unknown. Push back the thorn-riddled stocks to discover a clandestine garden, blooming with mysterious vigor. Vivid colors mark the way to intricate tiles zigging and zagging through the green. Within the flowers lies the key to greater meaning. An explanation for all things unknown...

In Umbra Via, players compete to control and complete the most cunning paths. Reach into your bag to select wooden flowers, then place them on your secret board in the order of the paths you want most. But when players reveal their choices, things get delightfully tricky. Experience the magic of Umbra Via and find out why this award-winning design belongs on any table.

In more detail, at the start of each round four tiles are revealed from the deck, with each tile showing part of a path, e.g., a straight line, a curve, or a T. Players secretly draw three cubes from their bag and place them on spaces on their personal board corresponding to these tiles. They all reveal their choices, move their cubes to the chosen tiles, then secretly place three more cubes, then move those cubes to the tiles. Whichever tile ends up with the fewest cubes on it is placed in the 4x4 grid first, maintaining the same orientation, by the player who bid the most cubes on that tile. (Some cubes in your bag are worth two cubes during the bidding phase, but are then removed from the tile and returned to your bag prior to placement.) Then the next tile is placed on the grid, and so on.

When you place a tile, if all the "open" ends of that path are cut off — whether by the edge of the board or other tiles — you count how many cubes each player has on the path. The player with the most placed cubes retrieves "double-bidding" cubes from the reserve equal to the number of tiles in the path, adding these cubes and all other cubes to their bag. The player with the secondmost cubes on the path retrieves half this many "double-bidding" cubes, and so on. After removing and returning all the cubes on this path, remove the tiles from the grid, placing them in a discard pile.

As soon as a player has retrieved all of their "double-bidding" cubes from the reserve, they win!