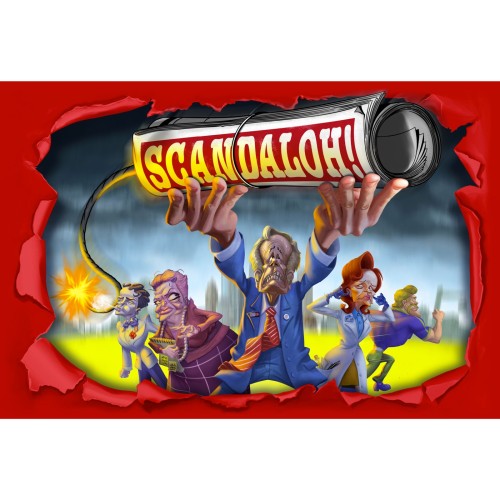 ScandalOh! Editor-in-chief Kickstarter Edition has been your wishlist!
add  Add to Wishlist

ScandalOh! is a "Brilliant Deck System" deduction game about investigative journalism in which each playing presents a different scenario, and players have to bring a scandal to light.

WHAT is the scandal plot?
WHICH celebrity is behind it?
WHICH newspaper will make it public?

The game challenges you to use genuine investigative abilities to solve each case. To get the scoop, you have to keep an eye on the celebrities and their contacts, question the newspaper editors, search for clues anywhere in the city, and consult your sources. You do all of this while exchanging information with your opponents or hiding it from them, so get ready to use all your deductive skills!

The heart of ScandalOh! is simple: Players have a hand of seven cards, and each card has a value (1 or 2 points, according to the amount of information that it provides) and several references (i.e., the subjects of the card information). During a turn, you ask for information about three different references in which you are interested. The rest of the players can offer you cards that contain the requested references, and you can trade for those cards by giving the offering players the same number of points they have offered via cards in your hand.