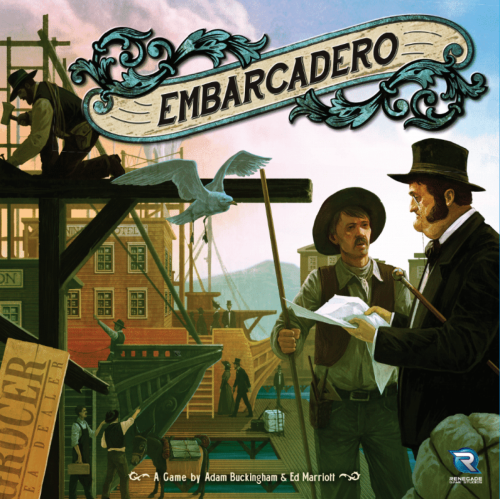 Build your empire to rule the waterfront of San Francisco during the Gold Rush.

Embarcadero + Unsinkable Expansion has been your wishlist!
add  Add to Wishlist

San Francisco, 1850. The Gold Rush is in full swing. Ships stream steadily in San Francisco Bay, brimming with would-be treasure hunters. Anchored off the coast of the boomtown lies a flotilla of abandoned vessels, their crews long since taken by gold fever. A few business moguls stake their claims on these derelict ships, towing them into the harbor to house their growing empires. Over time, this wharfside district, known as the embarcadero, would become the very heart of business enterprise in the thriving port city.

In Embarcadero, players step into the shoes of these savvy entrepreneurs. Build San Francisco on the hulls of these abandoned vessels and carve out a foothold in the city council. Do you have what it takes to rule the waterfront?

The game takes place over three rounds. In each round, players take turns playing cards and placing tiles to take control of wharves to earn points and influence.